The old incandescent bulbs will fade away after January 1 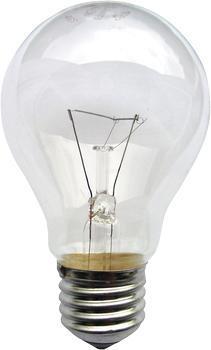 There's always someone who thinks cranky old stuff is cute -- you know, wood stoves, iron skillets, even the plain old light bulb, the incandescent kind that Thomas Edison developed back in 1879. Then, as now, this rather crude instrument was basically a glowing wire encased in glass.

There are many rotten things you can say about incandescents but the two most damning are that they don't last very long and they use an awful lot of energy to generate light. In both cases, heat is a big factor -- lots of energy is lost to heat instead of lumens and the high operating temperature contributes to early burn-out. There are some analogies we could make to certain humans here, but let's leave that for another time.

There are those who think the incandescents give off a warm and soft light. These are the same people who long for the days when cars had cranks.

But regardless of whether anyone likes it or not, the incandescent bulb is going the way of unsliced bread. It's being phased out and will start to disappear after January 1, 2014, when most production will stop.

We won't be left in the dark, though. There are three major replacements: halogen, fluorescent and LEDs (yes, basically the same technology that powers many TVs and automotive lights).

Halogen lights share some of the drawbacks of incandescents: they burn very hot and are a fire hazard if not installed and handled properly. They do make a lot of light though. And flourescents? Nobody likes them, not least because they contain mercury and are a contamination hazard if broken. They must also be disposed of properly. Good luck with that.

But fortunately, there's the LED, a technology that creates a lot of light with a fraction of the energy required for other bulbs and does so with a minimum of heat, contributing to its extremely long lifespan.

That's the good news. The bad news is that LED bulbs are expensive although the prices are coming down, and the pain of the upfront purchase price is relieved by their operating cost -- a typical 60-watt bulb costs more than three times as much per year to run as a similar LED blub. And yes, they really do last a lot longer. We have installed about 40 LED bulbs in our home and office over the last five years or so and all are still working perfectly.

Fortunately, Consumer Reports magazine has conducted a more rigorous study and provides a homeowners' guide to picking the best bulbs for a given situation.

Consumer Reports advises shoppers to pay attention, as there are still expensive bulbs being offered. Here are some less expensive, LED options that impressed the experts:

The full report on LED lightbulbs, which includes additional lightbulb recommendations is featured in the January 2014 issue of Consumer Reports and at www.ConsumerReports.org.