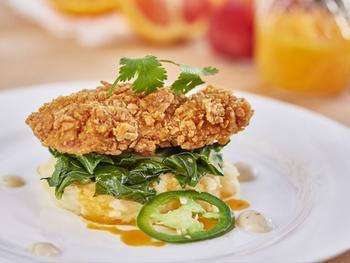 Mempis Meat isn't in Memphis and the meat it manufactures doesn't come directly from animals, but that hasn't stopped it from landing $17 million from such well-known investors as Bill Gates, Richard Branson, and food industry giant Cargill.

The beefy investment was announced yesterday, setting off a burst of excitement in "clean meat" circles.

"Today is a watershed day for our environment, for sustainable food production, for global health, and for animals," said Bruce Friedrich, executive director of the Good Food Institute.

What is this clean meat anyway? It's sort of a way to have your meat and eat it too -- it's meat that has the same chemical composition as dead-animal meat. The difference is that instead of being raised on the hoof, so to speak, clean meat is made in the lab, using self-reproducing cells identical to those found in living animals.

The process is touted as beneficial because it reduces the pollution produced by large herds of animals. Also, in a world increasingly populated by consumers who want to promote kindness to animals, it doesn't require raising and slaughtering living creatures. Of course, it also means that fewer animals will get to experience life on earth, but that's perhaps a question for another day.

“We’re going to bring meat to the plate in a more sustainable, affordable and delicious way,” said Uma Valeti, M.D., co-founder and CEO of Memphis Meats, in a press release. “The world loves to eat meat, and it is core to many of our cultures and traditions.

"Meat demand is growing rapidly around the world. We want the world to keep eating what it loves. However, the way conventional meat is produced today creates challenges for the environment, animal welfare and human health," Valeti said.

For its part, Cargill says the investment "is an exciting way for Cargill to explore the potential in this growing segment of the protein market."

You won't find clean meat at the supermarket quite yet, though. Memphis Meats is very much a start-up and is still working towards bringing down the price of its product and clearing regulatory hurdles.

Both the U.S. Food and Drug Administration and the Agriculture Department will have to sign off on the process. Before doing that, they'll need to be convinced that clean meat is fit to eat.