Civility at a fast food restaurant 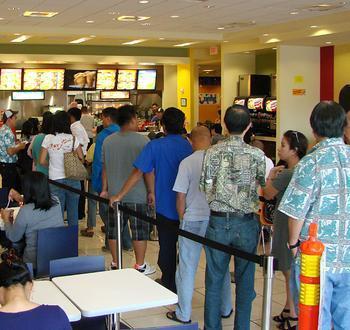 I witnessed something remarkable yesterday. It shouldn't have been remarkable, but to me it was.

It was lunchtime and I headed to a Richmond, Va.,-area Wendy's for an apple pecan salad. The man ahead of me in line appeared to be a laborer, or some kind of construction worker. His hair was uncombed, he wore a dingy white t-shirt and faded jeans. And he was clearly upset.

I overheard him tell the cashier that he had been in the drive-through line, attempting to place his order, when he perceived the young woman taking his order was rude and disrespectful.

I didn't hear all the specifics, but I braced myself for what might come next. After all, we've all read those stories about someone pulling a gun on a fast food worker because they were shorted one chicken nugget.

But what impressed me about the man was how he complained. Though angry, he kept his emotions under control. There was no profanity. He stated how he thought he has been unfairly treated and just wanted accountability.

The young woman who had taken his order, who also happened to be the supervisor on duty, came to the counter. She was African-American. The customer was white. Was this going to escalate into something racial? Perhaps it could have, but it didn't.

Though he appeared at first to be uncomfortable confronting the person he thought had wronged him, the man nonetheless restated his grievance, again without getting emotional.

The supervisor apologized for saying anything that offended the man and said it was never her intention to be disrespectful. Again, she said she was sorry that it came across that way.

"Well, I guess I could have misunderstood what you said," the customer conceded.

About that time another employee placed the man's order on the counter for him.

"We good?" the supervisor asked.

"We good," the customer replied.

"Well, you have a wonderful day," she said.

If you think about it, it was a textbook encounter. The customer demonstrated the best way to complain to a company. Be honest, direct, but unemotional.

The supervisor showed the correct way to handle a complaint, with pitch-perfect professionalism. Wendy's should be proud of her.

Heck, in this day and age of anger and general nastiness, we should all be proud of both of them.