Women at average risk of breast cancer should get mammograms every three years, study suggests

However, women with dense breasts should be screened more 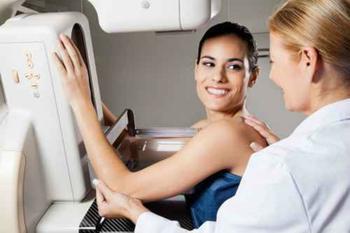 Getting a mammogram every two years is currently recommended, but a new study finds that some women may only need a mammogram once every three years.

The study finds that women between the ages of 50 and 74 with lower breast density who are at an average risk for breast cancer may not need to be screened as frequently as those with higher breast density.

While these findings aren’t meant to replace existing guidelines, the study’s authors say they do show that individual preferences and risk factors should play a role in how often women are screened.

Yearly or every three years

Yearly screenings may still be best for women with high breast density, according to the National Cancer Institute-sponsored study. Postmenopausal women, especially, may benefit from getting a mammogram once a year.

But researchers say women with lower density breasts could go longer between screenings. Using computer models, the researchers weighed the risks and benefits of having mammograms at different intervals and found that the “every two years” recommendation may not be every woman’s best bet.

For average-risk women with lower breast density, the team found no increased risk in having mammograms every three years. In contrast, women with high density breasts should be screened once a year.

Less frequent mammograms could even lead to fewer false positives and unnecessary biopsies, said lead author Amy Trentham-Dietz, PhD, of the University of Wisconsin. "Tailored screening is really the goal, to make the balance of benefits and harms the best it could be," she told the Wisconsin State Journal.

In addition to breast density (which may be diagnosed by a radiologist during a mammogram), women and their doctors should consider other risk factors in determining how often to be screened.

Family history, the age of your first period, and the age at which you had your first child are among the factors that could influence how often you should be screened, Christine Berg, M.D., a radiation oncologist with Johns Hopkins Medicine in Bethesda, Maryland wrote in an accompanying piece.

But while Berg agrees with the study’s finding that women with dense breasts should be screened more often, she is hesitant to recommend less frequent screenings for average-risk women until more research has been done.

“If a woman has low breast density, I’d say stick with the current recommendation of every other year,” she said. “Then maybe as she gets older, as we get more data and we learn more, perhaps you could switch to every third year.”

The full study was published in the Annals of Internal Medicine.