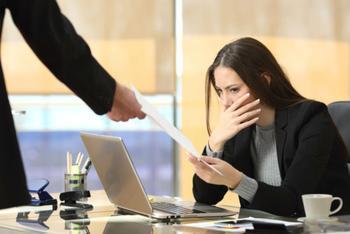 When focusing on the workplace, women's rights advocates usually point out the difference in pay that men and women receive for the same work and responsibility.

But researchers at three major business schools point to what they say is another troubling discrepancy. After analyzing the financial services industry, the researchers contend that men and women working as financial or wealth advisors are often treated differently for the same types of transgressions or violations of policy.

Men often get off with a reprimand, they say. Women get fired.

Gregor Matvos of the University of Chicago, Stanford’s Amit Seru and University of Minnesota’s Mark Egan collaborated on the paper, “When Harry Fired Sally: The Double Standard in Punishing Misconduct.”

They acknowledge the issue tends to get less attention because it is often difficult to quantify. Sometimes, charges of wrongful termination are without merit.

Hard to ignore the numbers

The research turned up something else. The researchers say men are far more likely to be found guilty of misconduct than women.

“Although men commit misconduct at a rate that is three times higher than women, women face substantially harsher punishments both by the firms that employ them, and other potential employers in the industry,” the authors write.

Women less likely to get a second chance

As an example, the study contends that if a woman is fired for violating a confidentiality agreement, she will have a more difficult time getting rehired than a man in similar circumstances.

“The financial advisory industry is willing to give male advisers a second chance, while female advisors are likely to be cast from the industry,” the study concludes.

The researchers say they were unable to identify the reason for the alleged discrimination. At first they suspected that women tended to commit transgressions that were more costly to the firm. That turned out not to be the case.