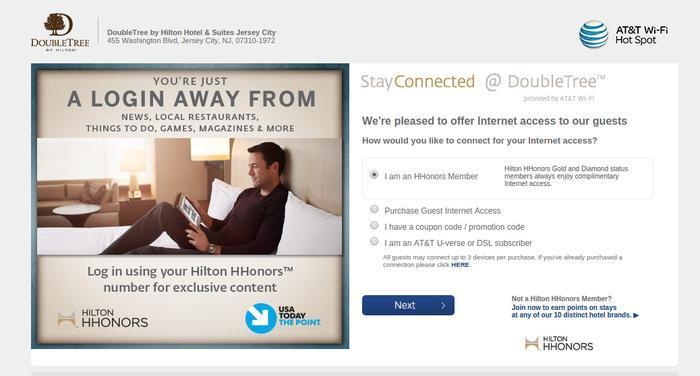 Last week, we reported that the Hilton and Marriott hotel chains were beseeching the Federal Communications Commission to let them block their guests' wi-fi hotspots, forcing them to use the hotels' expensive and often balky networks.

This has not gone over well with the traveling public and there are signs the hoteliers may be backtracking.

Marriott, which was recently fined $600,000 for forcing convention attendees to pay up to $1,000 per device to use the hotel's wi-fi system, said today that all it wants to do is control the use of wi-fi in its conference and meeting spaces, not in guests' rooms.

“It has never been nor will it ever be Marriott’s policy to limit our guests’ ability to access the Internet by all available means, including through the use of personal Mi-Fi and/or Wi-Fi devices,” Marriott said in a statement reported by Re/code. Instead, the hotel chain said it wants the leeway to block networks which might “pose a security threat to meeting or conference attendees or cause interference to the conference guest wireless network.”

Marriott says it has legtimate security reasons for controlling the use of wi-fi in spaces where large crowds gather.

"The question at hand is what measures a network operator can take to detect and contain rogue and imposter Wi-Fi hotspots used in our meeting and conference spaces that pose a security threat to meeting or conference attendees or cause interference to the conference guest wireless network," Marriott said.

Hilton, meanwhile, hasn't had much to say beyond what was in its original FCC filing. Unlike Marriott, it hasn't said flatly that it is not interested in blocking guests' wi-fi usage, as far as we know. Hilton did not respond today to a request for comment. Neither did the Federal Communications Commission.

But surely the hotel chains would not take it upon themselves to interfere with guests' wi-fi while petitioning the FCC to change its regulations. Would they?

Well, maybe they would. We spent three nights over the Christmas holiday at the Hilton Doubletree in Jersey City, N.J. and discovered that the wi-fi hotspot on our AT&T Wireless smartphone didn't seem to be working, even though it works just about everywhere else.

We were able to see the hotspot on our phone but could not connect to it. Our only options were to pay $12 per day to use the hotel's system or go elsewhere. Which we did. The hotspot worked flawlessly elsewhere in Jersey City and the New York City area, as it usually does. (As an aside, we would have had enough points in our HHilton Honors account to qualify for free wi-fi had Hilton not been assigning our points for the last year or so to a certain Jim Hood who resides in the United Kingdom but that's another story).

Upon returning home to Northern Virginia, we tried the hotspot again, just to be sure. Sure enough, the same laptop we had been using in New Jersey connected instantly to the Blackberry phone we had been using. No settings had been changed. Everything was just as it had been at the Hilton -- except we weren't at the Hilton.

The argument may soon be moot. There's a definite trend in the hotel industry towards free wi-fi, although most hotel chains will require you to be a member of their loyalty program to get it.

Holiday Inn already offers free Internet access to its loyality club members. And Marriott is saying all of its Honored Guests will get free w-fi early this year. Elite members? They'll get faster wi-fi, which may not be saying much.

Hilton is the only large chain that hasn't declared it will offer free wi-fi at all of its properties, according to recent press reports.