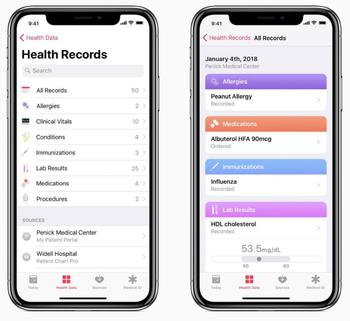 Apple’s iOS 11.3 update has been released to the public, which means iPhone users who download the latest software now have access to a new Health Records feature.

The new feature lets iPhone users at more than 100 hospitals and clinics across the country access parts of their medical records through the Health app, Apple announced.

It was first unveiled in a beta version back in January, and Thursday’s update makes it available to all users who update their phone’s software to the latest version.

“The new Health Records feature brings together hospitals, clinics, and the existing Health app to make it easy for consumers to see their available medical data from multiple providers, whenever they choose,” Apple previously said.

By giving patients the ability to retrieve their medical records right from their iPhone or iPad, Apple hopes to give users more control over their health history.

With greater control comes a better understanding of health history, which can set the stage for patients to have informed conversations with physicians and family members about future medical decisions.

“Patients from participating medical institutions will have information from various institutions organized into one view and receive regular notifications for their lab results, medications, conditions and more,” the company said.

Health Records data is encrypted and protected with the user's iPhone passcode.

The medical information will be available to iPhone users who are patients at 39 health systems that are working with Apple, including Stanford Medicine and Johns Hopkins. Previously, the medical records section of the app was only available to users who had signed up to test a pre-release version.

Apple said the following health systems, by region, have enabled the feature: