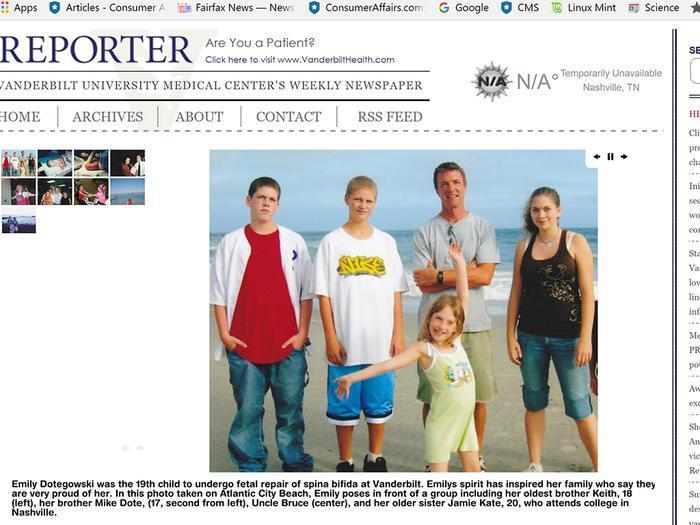 At the children's hospital at Vanderbilt University Medical Center in Nashville, Maryann Dotegoski underwent open fetal surgery, an extremely complicated and difficult operation, to try and repair her child's spina bifida while the baby was still in the womb.

The hospital website now proudly displays a picture online of the child, Emily, and her mother, who was only the hospital’s 19th patient to undergo the operation. Emily, now 12, has been photographed learning to walk, playing with friends, and enjoying the beach. Though Emily can walk on her own, she still uses a wheelchair at times. "Emily’s muscles will never be able to gain full strength and she tires easily," the hospital’s website explains.

The cause of spina bifida, a birth defect affecting a baby's spinal cord, are largely unknown. But a lawsuit filed on behalf of Maryann Dotegoski's daughter points to one likely culprit: the anti-epilepsy drug Depakote, produced by Illinois-based Abbott Laboratories, whom the family is suing. The company is not contesting that its drug poses a danger to pregnant women but argues that Dotegoski should have known about the risks in 2004 when she was pregnant.

"Much higher" risk of birth defects

Abbott Labs also argues that it is protected by the statute of limitations, though a federal judge disagrees.

On October 19, United States District Judge Nancy Rosenstengel dismissed a motion filed by the company to drop the claim against it based on the statute of limitations, saying in her opinion that "it is undisputed that the Illinois statute of limitation does not bar the current claim.” This is because Illinois laws allow minors to seek damages at any time and up to two years after they turn 18, allowing the complaint against Abbott to go forward for now.

The Food and Drug Administration now clearly states that the risk of birth defects in babies born to mothers who received valproate (the drug marketed as Depakote), is "much higher" than average, or 12.5 times worse. The agency's warning to healthcare professionals about prescribing Depokate to pregnant women dates back to 2009, but lawsuits filed by women across the country say they were not aware of the dangers the drug posed during the first trimester of their pregnancies.

In 2006, two years after Dotegoski’s pregnancy, valproate was reportedly the second-most prescribed epilepsy drug in the United States. Depakote is also approved to treat migraines and bipolar disorder. Off-label, Abbott has been aggressive in promoting it to treat conditions such as dementia, leading to a criminal investigation and the company reaching a $1.5 billion settlement with the FDA four years ago for misbranding its product.

In a separate lawsuit filed this year in St. Louis, eight different plaintiffs allege that Abbott Laboratories and competitor AbbieVie both knew about the risks valproate posed to unborn fetuses even before they began selling and marketing the drug.