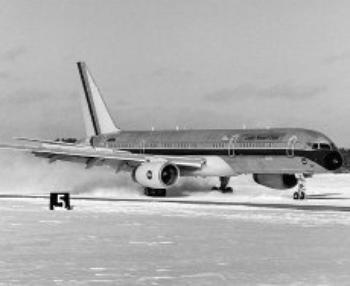 For some parts of the country, the winter season has been fairly mild. However, it seems that Mother Nature has at least one more storm up her sleeve before we usher in the spring.

Winter storm Stella has already begun making its way through the Midwest, and it is projected to dump at least a foot of snow throughout the Northeast. The National Weather Service has stated that New York City could see as much as two feet of snow and has issued a blizzard warning for affected areas.

“Falling and blowing snow with strong winds and poor visibilities are likely. This will lead to whiteout conditions. . . making travel extremely dangerous. Do not travel. If you must travel. . . have a winter survival kit with you,” the organization warned.

Airliners certainly seem to be taking the warnings to heart. Although the storm isn’t projected to really hit the Northeast until Monday night, FlightAware shows that nearly 1,700 U.S. flights have been delayed today, with another 1,400+ being canceled.

Tomorrow, the numbers turn even worse. Nearly 4,000 flights have been canceled thus far, with more expected to be announced in the coming hours. Many major airlines have already canceled hundreds of flights in preparation and are offering waivers and chances to rebook. Some of those options can be found below:

American Airlines – American is waiving the change fee for travelers who: bought a ticket by March 12, 2017, are scheduled to travel March 12-15, can travel March 12-17, don’t change their origin or destination city, or rebook in the same cabin or pay the difference. Customers may also be able to change their trip under certain circumstances. More information can be found here.

Delta Air Lines – Travelers flying with Delta through any affected airports on March 14 or 15 will be able to rebook through March 17 without paying any additional fee.

JetBlue – JetBlue is offering a full refund to customers who experience a canceled flight. However, travelers also have the option to rebook flights from affected areas Monday through Thursday.

Southwest – Southwest is allowing travelers to rebook or fly standby within 14 days of their original flight date without paying any additional charges.

United –  United travelers flying through affected cities have the option of rebooking their flights through March 17 without incurring an additional fee.

Travelers flying with these or other airlines should be sure to check on their flight status and options before getting to the airport to see if policies or offerings have changed.