The test focuses on safety for front seat passengers 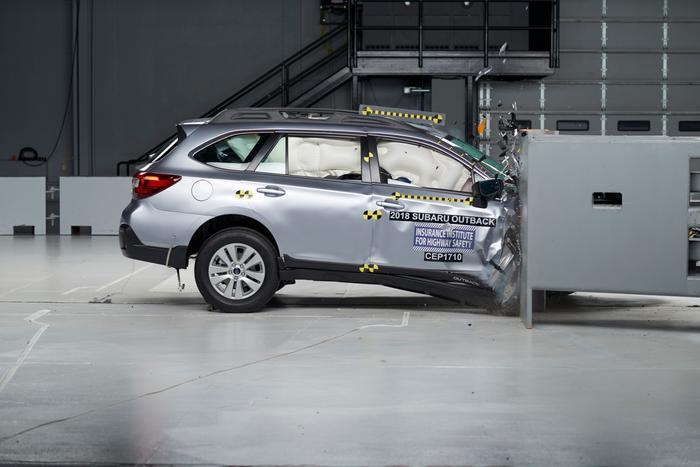 Because it believed some automakers were giving short shrift to the right side of the vehicle, the Insurance Institute for Highway Safety (IIHS) has instituted a small overlap front crash protection for the vehicle's passenger side.

A good or acceptable passenger-side rating will be required to qualify for the Institute's 2018 TOP SAFETY PICK+ award.

In the first test group, 10 out of 13 midsize cars earned a good rating, while one was deemed acceptable and two earned a marginal rating.

"The midsize cars we tested didn't have any glaring structural deficiencies on the right side," said IIHS Senior Research Engineer Becky Mueller. "Optimizing airbags and safety belts to provide better head protection for front-seat passengers appears to be the most urgent task now."

That test sends a vehicle into a barrier at 40 mph with just 25 percent of the vehicle's front end overlapping the barrier on the driver side.

It mimics what happens when the front driver-side corner of a vehicle collides with another vehicle or with an obstacle such as a tree or utility pole.

The Subaru Outback was one of the top performers and its good passenger-side rating also applies to its twin, the Subaru Legacy.

In the test, the passenger's space was maintained well, with maximum intrusion of 4 inches at the right edge of the toepan. The safety belt and front and side curtain airbags worked together to keep the dummy in place, and measures taken from the dummy showed there would be a low risk of injury in a similar real-world crash.

The Chevrolet Malibu and the Volkswagen Passat earn a marginal passenger-side rating.

In both cars, the passenger dummy's head slid off the front airbag and contacted the dashboard. Measures taken from the dummy showed head injuries would be possible in a real-world crash of the same severity.

In the passenger-side small overlap test of the Subaru Outback, the passenger dummy's head hit the front airbag and stayed there until rebound.

The Passat is one of five cars with an acceptable, instead of good, structural rating. It had maximum intrusion of 7 inches at the lower door-hinge pillar.

The vehicle with the most structural damage was the Mazda 6, where intrusion reached 9 inches at the lower door-hinge pillar, compared with 5 inches in the driver-side test.